The political theater is a distraction

The political theater is a distraction, par Jeffrey Tucker 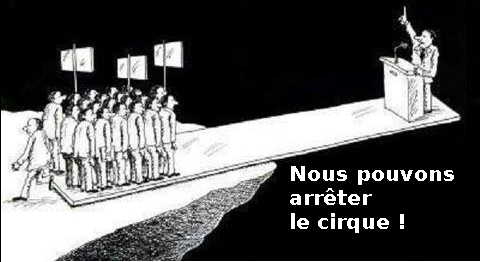 In every election season, a new generation comes of age and experiences the political theater for the first time. The experience is formative. It challenges you to decide what you think about the world. Which candidate best represents my values and shares my sense of how things ought to be? More fundamentally, how should things be in politics?

As time goes on and you experience successive presidential election cycles, illusions begin to fall away. You start to see the whole thing for what it is.

So this article is for those who do not yet see. It is a quick tutorial in political reality, and a way to avoid the pain and suffering that comes with gradually discovering that reality on your own.

It’s not that your vote doesn’t matter at all. It might matter, but the odds are incredibly thin. If you live in a swing state, you might have a 1 in 10 million chance of swinging the election. But on average, “a voter in America had a 1 in 60 million chance of being decisive in the presidential election,” concludes one statistical analysis in Economic Inquiry. As the authors indicate, you are more likely to die in an car crash on the way to the polls.

Why do so many people vote anyway? Are they deluded? Maybe, but many people treat voting as a consumption good, which is to say they enjoy it. It makes them feel patriotic. There’s nothing wrong with that, but if you are still voting in an attempt to affect the outcome — and are still spooked that your failure to vote might ruin everything — here is a solution. Find someone who will vote differently, and you can both decide to grab a drink together instead.

Lesson 2: You Are Voting for People, Not Policies

There are elections in this country in which people really do decide on issues. In state and local elections, there are referenda on bond issues, taxes, pot decriminalization, and so on. Exciting stuff! But at the federal level, no way. You are voting only on personnel. Sure, the candidates can promise this or that, but how they behave after the election is something over which you have no control — and there is no recourse if something goes wrong.

The beginning of political wisdom comes with the realization that the mainstream candidates do not exhaust the ideological options.

Wouldn’t it be grand if there were real national elections on issues? Let’s say that the ballots had lists of spending priorities, policy ideas, and methods of government management. How many people would vote for their smartphones to be surveilled? For ever-less choice in health care? For higher gas taxes? I don’t know the answer here, but it would be interesting, for once, to see. Direct democracy on issues is technologically feasible today. It is even possible to give people the government they actually want through subscription services. We don’t do it because the ruling class likes the system the way it is.

Lesson 3: These People Are Not Actually the Government

Last year, I calculated the number of government employees who are actually running the state and compared it to the number of people we elect. Depending on how you calculate this, we are permitted to elect between 0.02 percent and 0.0004 percent of those who are in charge of our lives. The unelected constitute the deep state that no one wants to talk about. You could ship the whole class of elected rulers to Zimbabwe for four years and it would make no difference.

But wait: Aren’t the elected rulers in charge of the rest? Not really. Most of the permanent bureaucracy can’t be fired, no matter what. In any case, delegation to professionals is what elected rulers specialize in. The first act of the president is to fill 3,000 positions with political appointees. Congressional offices are managed by DC hacks. Politicians are specialists in what they are doing now: trying to get elected. The day they take office is the day the next election begins.

Lesson 4: These Are Not the Only Options

The beginning of political wisdom comes with the realization that the mainstream candidates do not exhaust the ideological options. Candidate A says that health care policy should be this way, and candidate B says it should be that way. What neither candidate ever says is that perhaps health care should not be the responsibility of government at all. And this goes for every other issue in national life: communications, labor, energy, environment, foreign policy, and so on.

The whole conventional political debate is premised on the idea that government should be running things. What’s left out here is the greatest single idea ever discovered in the history of the social sciences: society runs itself better than any authority can run it.

This is true in economics but also in culture, security services, religion, and family life. Liberty just works better. The discovery of this truth built civilization. But that idea is absent from the options we are given. No matter: you can discover it on your own if you are brave enough to step outside the partisan paradigm.

Every candidate will speak about his or her vision for America. They talk as if they want to be, can be, will be, in charge of pushing history forward. But look around: the progress you experience in your daily life has nothing to do with the political class. Think about the mobile applications you use to stay in touch with family, find directions in a new city, monitor your health, communicate with your network. These services were not granted by the political class. They came to us via entrepreneurs and enterprise, working themselves out in the course of social evolution.

The political theater is a distraction.

In “Is Politics Obsolete?” Max Borders and I chronicled all the ways the world has changed over the last four years. It’s remarkable what’s happening today. It’s revolutionary. None of this was anticipated by the last election. And none of it is inspired by politicians. The change is coming from within the fabric of the social order. And that change is continuing by the day. If you want to be part of it, to make a difference in the world, the realm of enterprise and individual action is the sector for you. In many ways, the political theater is a distraction — a learning opportunity, yes, but ultimately not decisive for the kind of life we want to build.

The tendency to treat elections as personal moments in our lives might be a product of democracy. We are encouraged to believe that we are running the system. So we flatter ourselves that our opinions matter. After all, it is we the voters who are in charge of building the regime under which we live. But look deeper and you discover a truth that is both terrifying and glorious: the building of the great society can’t be outsourced. It is up to you and me.