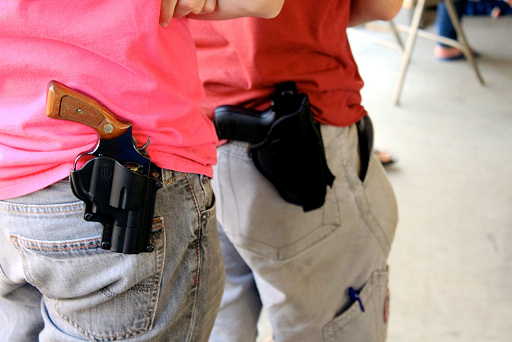 «  New Hampshire Town Nullifies All Gun Restrictions Obstructing State Law
Alstead, NH- A conflict at a New Hampshire recreation area where two people were open carrying led to the town wiping out all of its local gun restrictions dating back to 1763.
Last weekend, the town of Alstead held an annual event at Vilas Pool locally referred to as “Vilas Pool Day”, a town-owned recreation area. Two people were at this event open carrying sidearms, which is generally not considered unusual as New Hampshire is well known as an open carry state. A member of Vilas Pool’s board of directors approached the men and instructed them to remove their firearms from the recreation area, citing a no-firearms policy at Vilas Pool.
...
The meeting ended with the selectboard unanimously passing a motion to emphasize New Hampshire’s provision, nullifying all previous gun restrictions that violate state law. The motion reads: “It is moved that the Board of Selectmen as stated in NH RSA 159:26 hereby declare any ordinance, policy or any other act passed by any previous Board of Selectmen that restricts in any way firearms or ammunition on the property of or within the Town of Alstead to be null and void.”
...
Both Kemp and Rietmann pointed out that the entire ordeal was handled amicably by all parties. “To me it was simply making sure that our town follows New Hampshire law,” Rietmann told Bamforth regarding the motion’s passage. »

"For the first time, a civilized nation has full gun registration. Our streets will be safer." - Adolf Hitler 1935