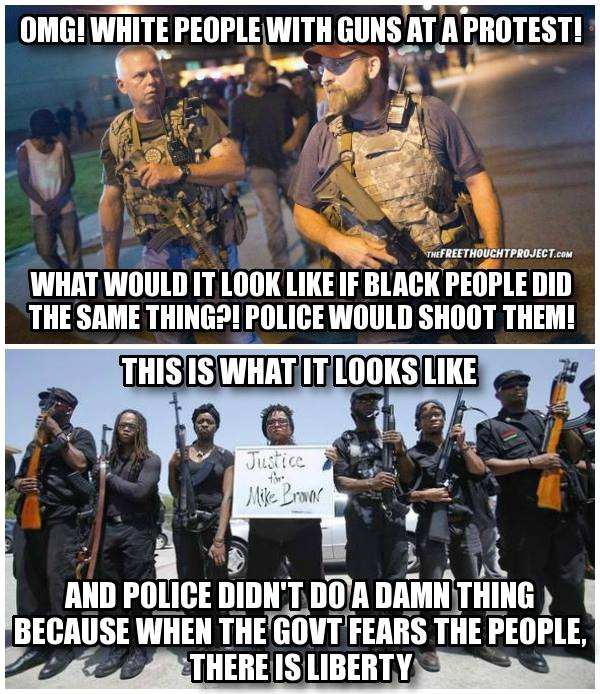 Ferguson, MO — A state of emergency has been declared in Ferguson, MO and is expected to last through Thursday. The curfew comes in spite of no arrests being made on Tuesday and as protesters remain peaceful in spite of police attacking them.

An unexpected party to the protests showed up this week, and the country has been debating their presence ever since. The Oath Keepers are an organization of current and former law enforcement and military personnel who’ve sworn to protect the citizens from the atrocities committed upon them by the state.

Rumors about racist white men with guns showing up to hurt protesters were rife through social media despite the Oath Keepers clearly stating their peaceful intentions of protecting the people – from the police.

Misinformation from the mainstream calling attention to the skin color of these individuals can be seen as an overt attempt at further stoking racial divide in America.

Instead of seeing these men as companions in the fight for civil rights, they are written off as privileged white men and their aid dismissed as a stunt.

Those who would dismiss the help from these men because of lack of melanin in their skin are missing the point entirely. It is not black vs. white. It is the state vs. everyone.

There is no question that black people in America receive far more police harassment and are killed by police at a much higher rate than white people. This is a fact, and it needs to be addressed. But when the people who show up to help solve that problem are shunned and denied acceptance based upon their skin color, then we all lose.

Twitter was rife with comparisons about how these white men with guns were not shot because of their skin color. Claims were made that if they were black they would have been shot. But this is just not true. Police do not typically engage any organized groups with guns as they are a very hard target to harass.

Black Panthers in Texas conduct armed marches through neighborhoods, all the time, and are never shot.

But that is Texas, not Missouri, right?

In November, we reported on a group of local black men who equipped their AR-15s and guarded private property to protect it from looters. They were also not shot.

The examples above prove two points. The first point is that the assertion was wrong about the Oath Keepers being shot had they been black. The second point is that when the government fears the people, no matter their skin color, there is liberty.

The Oath Keepers are in Ferguson to protect people of all skin colors, and a brief video of one of them proves this notion.

As a heated debate began between an Oath Keeper and a protester, the Oath Keeper set the record straight once and for all about what their intentions were. As a man antagonized the Oath Keeper about not having just intentions, the oath keeper proceeded to let him have it.

He starts off by calling for Justice for Tamir Rice, then Eric Garner, John Crawford, and many others. The Oath Keeper completely annihilated the premise that they were a bunch of racists. He then proceeds to address the very real problem of government oppression.

“Who else do we need to talk about, how man more, before we come together and stop this chickensh*t bullsh*t, and come together as people and say enough of this!?” he says.

By the time his rant is over, the protester had realized his folly and moved on.

Later on, the same oath keeper was spotted again and questioned again on video. And again, he sets the record straight as to whose side they are on. Pay close attention to his answer in the 30-second clip below.