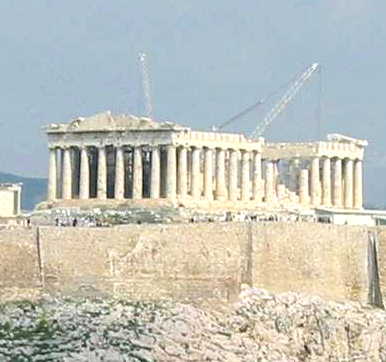 It’s considered politically incorrect to criticize culture these days, but whether using euros or drachmas, in or out of the European Union, Greece really has to, somehow, sort out its cultural dysfunction. I’m not talking about its customs, traditions, architecture or music, and I’m definitely not talking about its food. I’m talking about its cultural anti-capitalism. The negotiations, deals, counter-deals, referenda, protests and everything in between all mean very little if Greeks, by and large, don’t ditch their statist zeitgeist and rediscover Greek capitalistic exceptionalism.

A perfect example is Argentina. A default and sovereign crisis is supposed to chasten a nation into a sensible, market-oriented direction as the folly of debt-addicted big state crony socialism gets utterly discredited. It’s a nice theory. But Argentina, thirteen years after its 2002 default, and after years of soaring inflation, dollar shortages, and economic malaise, clings to its completely clueless, hyper-interventionist, socialist overlords who continue to run the economy into the ground. The reason is the core culture never changed. When your culture is toxic, up is down, black is white, socialist failure is capitalist failure.

As John Doe sees it, all those new industries that are supplying him with amenities unknown to his father came into being by some mythical agency called progress. Capital accumulation, entrepreneurship and technological ingenuity did not contribute anything to the spontaneous generation of prosperity. If any man has to be credited with what John Doe considers as the rise in the productivity of labor, then it is the man on the assembly line. ...

The authors of this description of capitalistic industry are praised at universities as the greatest philosophers and benefactors of mankind and their teachings are accepted with reverential awe by the millions whose homes, besides other gadgets, are equipped with radio and television sets.

The biggest risk to Greece is not austerity or fauxsterity or default or the euro or the drachma. And it’s certainly not the bogeyman of being frozen out of sovereign credit markets — it’s that Greek culture remains antagonistic to free, unfettered markets and is chronically state-dependent.

Take another Latin American country: Venezuela. After suffering crippling inflation rates throughout the 1980s and 90s, the electorate went on in 1998 to vote in another central planning inflationist in Hugo Chavez. They re-elected him in 2000, 2006 and 2012, and his successor Nicolás Maduro in 2013, even while the country was in a hyperinflationary death spiral and heading toward outright economic collapse. Venezuela’s problem ultimately is not fiscal mismanagement — it’s an anti-capitalist culture.

And so it is with Greece. After already securing debt relief and effectively being allowed to default by restructuring its debts over the next fifty years at subsidized interest rates — and after actually achieving economic growth in 2014 by cutting taxes and slashing the size of its sclerotic, bloated government — this toxic Greek culture prevailed once more and elected a team of socialist die-hards to drag it back into the mire. Of course it doesn’t help that on the other side of the negotiating table is another bunch of central planners in the EU, IMF, and ECB. Nevertheless, Greece sits stuck between two central planning negotiation parties because its people have been too busy demanding goodies instead of freedom. Most Countries Get Into Trouble — But Some Bounce Back Better Than Others

Any sovereign nation can overspend and get into financial trouble, and most have. It wasn’t that long ago that Britain was forced to go cap in hand to the IMF in 1976 and cede its fiscal sovereignty to that institution. By the latter half of the 70s, Britain was a downright mess. America stealth-defaulted on its international obligations in 1971 and suffered a rolling inflationary economic crisis for the rest of the 1970s. Both these countries bounced back. As did Chile, Uruguay, and the Philippines after their fiscal and financial turmoil of the 70s and 80s.

But some don’t bounce back, and I believe this happens when the national culture is, or has become, fundamentally anti-capitalist and resigned itself pathetically to cradle-to-grave state-dependency. In addition to Argentina and Venezuela, we’ve seen prolonged economic and financial malaise following painful crises in the likes of Zimbabwe, Ghana, Bolivia, Nigeria, Russia, Turkey, and now southern Europe. These countries don’t seem to learn from their mistakes because they don’t seem to want to or can’t locate the lesson amid the intellectual haze of their cultural zeitgeist.

But really the lesson is clear. An economic crisis can jolt a fundamentally pro-capitalist (or mostly pro-capitalist) nation that had lost its way back onto the straight and narrow. But there is no guarantee of recovery when the culture has descended into infantile anti-capitalism, dysfunctional statism, and an antagonism toward entrepreneurial dynamism and self-reliance. For these a crisis may not herald recovery but instead a longer, deeper national decline. Only a culture shift resulting from the spread of sound ideas can make Greece (and other countries) a fertile ground to accept real solutions. The need to spread the good news of liberty and free markets is clearly as urgent as ever.