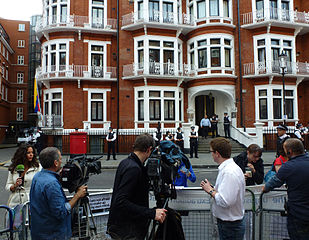 Mr Assange’s representatives understand that the Guardian is about to publish an ’opinion column’ by US Guardian blogger and polemicist Jessica Valenti, based on materials provided by parties in Sweden attempting to extradite Mr Assange. These include an interview between the alleged complainant, referred to by the prosecutor as ’SW’, and Valenti.

Mr Assange’s representatives have asked the Guardian to present a "right of reply" statement appended to the article, but the Guardian declined, as opinion pieces are not subject to the same editorial standards as news articles.

Although Mr Assange’s representatives have not been shown the article, in the interest of accuracy, journalists reproducing or reporting about the piece, and the public in general, should note the following facts:

Julian Assange has not been charged at any time.

Julian Assange was cleared of ’rape’ five years ago

On 21 August 2010 the Chief Prosecutor Eva Finne stated she "made the assessment that the evidence did not disclose any offence of rape". On 25 August 2010 she stated (https://wikileaks.org/IMG/html/Affidavit_of_Julian_Assange.html#efmNdPNvM) that "The conduct alleged by SW disclosed no crime at all and that file (K246314-10) would be closed." The case was then closed.

The matter was subsequently re-opened with a different prosecutor after the intervention of a senior Swedish politician (https://wikileaks.org/IMG/html/Affidavit_of_Julian_Assange.html#efmOWoOb8), Claes Borgstrom, during the heat of Mr Assange’s conflict with the United States. The new ’preliminary investigation’ has been in stasis since 2010 and has not issued a finding. Mr Assange has not been asked a single question. That an extradition warrant was issued for him under such circumstances has been the subject of serious debate and led to the UK Parliament changing the law in 2014 to ban further cases of "extradition without charge".

It is on record that Swedish authorities unlawfully disclosed the identities of Julian Assange and the alleged complainants (https://archive.is/MqERJ#selection-1311.1-1423.1) to the Swedish tabloid press, damaging their reputations and exposing them to vilification.

The US states (http://pdfserver.amlaw.com/nlj/wikileaks_doj_05192014.pdf) that there is a pending prosecution against Julian Assange for espionage and other offences related to his WikiLeaks publications. The US grand jury against him was launched six months prior to his visit to Sweden. He was granted political asylum in relation to political persecution by the United States. The United Kingdom and Sweden have refused to provide an assurance that he will not be transferred to the United States.

’SW’ felt she was "railroaded by police and others around her"

Her SMS messages (https://wikileaks.org/IMG/html/Affidavit_of_Julian_Assange.html#efmNdPNvM) from the day of the police visit and immediately after, held by the Swedish authorities, state that she "did not want to put any charges on JA but that the police were keen on grabbing him" (14:26); and that she was “shocked when they arrested JA because she only wanted him to take a test” (17:06); that she “did not want to accuse JA for anything”; and at 22:25 that “it was the police who made up the charges”. This is corroborated by witness statements taken by Swedish authorities from friends of ’SW’, Marie Thorn and Hanna Rosquist. These statements include SW stating that she felt she had been "railroaded by police and others around her”.

"After AA and SW spoke to each other and realised that they had both had intercourse with [JA] during the currency of his visit in circumstances where respectively they had or might have been or become unprotected against disease or pregnancy, SW wanted [JA] to get tested for disease. On 20 August 2010 SW went to the police to seek advice." (Agreed Statement of Facts to the UK Supreme Court, 2012 = http://www.scribd.com/doc/80912442/Agreed-Facts-Assange-Case)

Why is this relevant now?

In the past two months there have been almost unanimous calls from Swedish jurists, former prosecutors and the editor of Sweden’s top legal journal criticising Swedish prosecutor Marianne Ny, and even suggesting that she be removed. The United Nations body on Arbitrary Detention, the WGAD, is also about to rule on the case of his continuing detention without charge. So sensitive has the matter become that out of the 34 press releases on the Swedish Prosecution Authority’s website (http://www.aklagare.se/In-English/), 29 are about Julian Assange.

In November 2014 the Swedish Court of Appeal found that the prosecutor was in breach of her duty to progress an investigation expeditiously and at minimum inconvenience and suspicion to the suspect by refusing to take Julian Assange’s statement over the last 4.5 years. As a result of this breach, last week three misdemeanor allegations expired.

Sweden’s legal community is practically unanimous that the Assange case has been mishandled and driven by the prosecutor’s attempts to save face. The Secretary General of the Swedish Bar Association Anne Ramberg has said (http://www.theguardian.com/media/2015/feb/25/julian-assange-appeals-sweden-supreme-court-arrest-warrant) : "The Assange story has become a less than flattering adventure not only for the English courts’ handling of the case, but also for the Swedish prosecutor". Svante Thorsell, an eminent defence lawyer and columnist, wrote (https://www.gp.se/nyheter/debatt/1.2796215-fallet-julian-assange-ett-brott-mot-anstandigheten) that: "Something is rotten in the Assange case... the prosecutor’s passivity in this case is a crime against decency." Former prosecutor Rolf Hillegren has called for her removal, stating that Julian Assange has been "discriminated against" (http://www.dagensjuridik.se/2014/02/assange-sarbehandlas-negativt). The editor of the Law journal Dagens Juridik, Stefan Wahlberg, told Swedish Radio (https://sverigesradio.se/sida/artikel.aspx?programid=1650&artikel=6212854) that "the bottom line is it’s the prosecutor who has the responsibility, no one else!" and that "Prestige has played a big part."